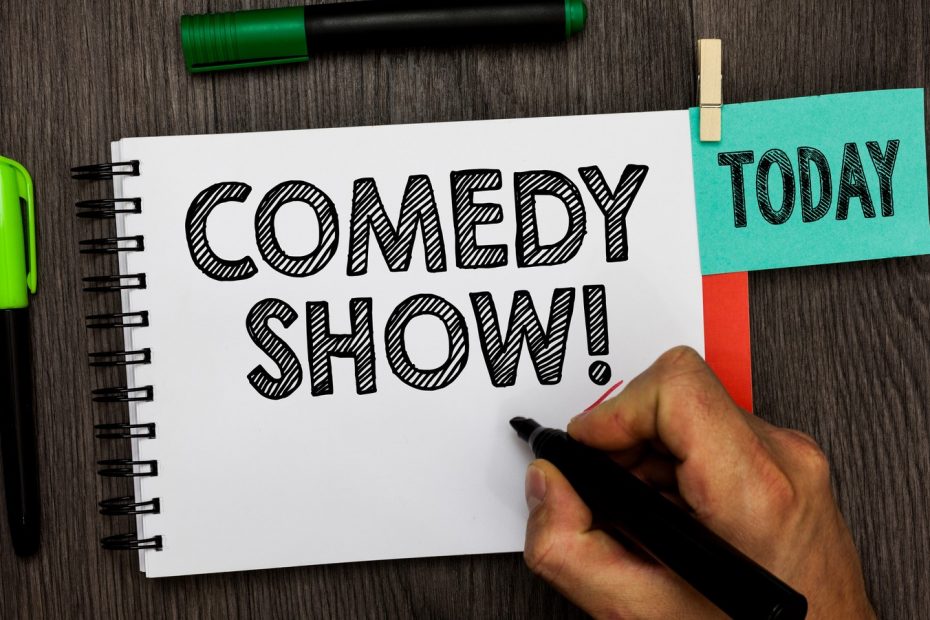 If you are the class clown of your friend group, chances are somebody at some point has suggested that you should try stand-up comedy. While the chances of succeeding as a stand-up comic without being funny are slim, beginners with an innate talent for joking around can quickly learn how to prepare and perform a set.

Keep reading this guide to writing stand-up comedy for beginners to determine if you might have what it takes to make an audience laugh from the stage.

What is Stand-Up Comedy?

Stand-up comedy is a performance given as part of a show where a comedian performs on stage, intending to make a live audience laugh. Comedians use scripted jokes that they develop in a set before their performance. The modern art-form originated from Vaudeville acts in the nineteenth century and remains a popular form of entertainment today.

Components of a Stand-Up Comedy Set

A stand-up comedy set is a routine that a comedian follows from the beginning to the end of the performance. Successful sets usually follow a general structure but can vary in length depending on the comedian’s role as a featured act or opening act.

Here is a list of the essential components that you need in a stand-up comedy set.

The opening of a stand-up routine is the first joke that a comedian performs on stage. This joke is critical for getting the audience to enjoy the show by encouraging them to start laughing.

Comedians refer to their jokes as bits. All bits consist of a setup, punchline, and conclusion. Most funny jokes have endings that the audience doesn’t expect.

Stand-up comedy sets consist of multiple jokes, so comedians have to develop transitions to help the set smoothly progress from one bit to the next with conversational bridges.

The closing used by a stand-up comic is just as vital as the opening. Giving the audience a solid close helps leave the audience with a positive impression. Closer jokes usually call back to bits made earlier in the show.

How to Write Stand-Up Comedy

Developing your stand-up set takes significant amounts of preparation and practice. Following these steps can help set beginners up for success during their first time on stage.

Every aspiring stand-up comedian should spend time studying other successful names in the industry. It is advantageous to compare the early acts of big-name comics to their recent performances. This practice allows you to see how they got better through the years.

Attending your local comedy club as an audience member is also a valuable experience. Study how the audience reacts to certain jokes to get a feel for the best way to deliver your set when it’s your turn to perform.

The best comedians draw material for their sets directly from their personal experiences. Start by writing down what you’ve learned from your own life and thinking about how other people can relate. No matter how small your idea, writing it down can help inspire you to find humor in new places.

Many of the best performers are the ones who share the most. Opening up about your personal life can make you seem more relatable and help others find humor in shared experiences.

Approach joke writing like writing a story. Following a narrative arc can help the audience understand the bit and keep your set flowing.

In every joke you tell, you need to identify the characters, setting, and conflict. The bit’s punchline is the plot twist that takes the story’s conclusion somewhere different from what the audience expected.

Longer stories should include other funny moments or jab lines to keep the audience engaged. Plus, remember that good comedy primarily exists outside of your comfort zone, so continue to push limits.

After you’ve written your jokes, you’ll need to assemble them into sets. The duration and amount of sets in your performance will depend on the length of your show.

Choosing how to arrange your jokes can be challenging, but just follow whatever order seems the most natural. It may be tempting to tell as many jokes as possible, but remember to leave extra time for laughter. Having backup bits is critical in case the audience doesn’t respond to your initial strategy.

Don’t forget the importance of transitions. Writing a good link will help link your bits together into one solid performance.

Develop and Open and Close

Your opening and closing jokes are crucial aspects of any good stand-up comedy set. The opening sets the tone and introduces you to the audience, while the ending makes the biggest impression on what the audience remembers.

Keeping your best bits for last is a safe strategy to ensure that you end on a positive note. Reintroducing material from earlier parts of the show in the closing is also an excellent way to help your set feel more cohesive.

Practice In Front of Others

You will never know how good your set is until you practice it in front of an audience. Rehearsing your routines in front of family and friends is an excellent way to gain confidence and benefit from honest feedback,

Practicing will also help you memorize your routine faster and discover the best pacing for optimal delivery. You can also work on any aspects of your physical presence or gestures that may enhance joke delivery.

No matter how good you think your set is, you should always be open to changes. Treat your audience like your editor and edit according to their reactions.

Developing a stand-up comedy set with these steps can help beginners transition from a funny friend to a successful comedian who enjoys performing. Adequate preparation is essential before a stand-up comedy performance, but there is no replacement for performance experience.

Try to get stage time whenever you can and consistently update your routine based on audience feedback. As you gain confidence, you’ll be able to edit your set in real-time while developing your comedic persona. But before you can do that, you’ve just got to start writing.