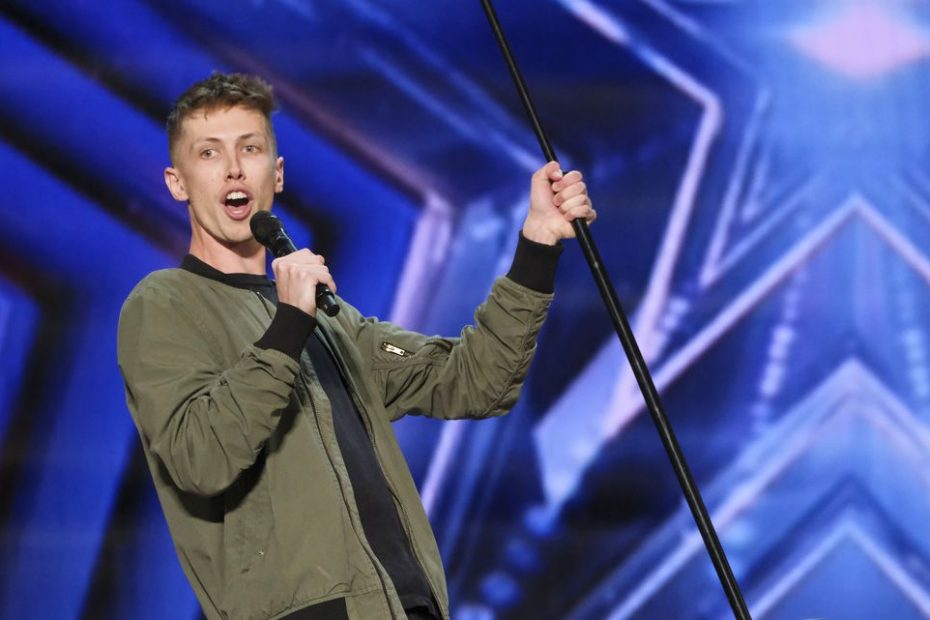 Tampa standup comedian Cam Bertrand’s audition for America’s Got Talent, which aired July 6 on NBC, killed with the judges.

Howie Mandel, Heidi Klum, Sofía Vergara and Simon Cowell cracked up as the 27-year-old with a baby face joked about difficulties purchasing wine.

They all said yes, meaning Bertrand will move forward in the competition, which awards $1 million to the winner. Stay tuned for information on Bertrand’s next appearance.

Among his accolades, Bertrand won the Florida’s Funniest competition, and has recorded a half-hour comedy special, Sophisticated Ignorance, which is posted on the YouTube comedy channel DryBar.

The Times caught up with Bertrand to talk about standup and his experience on America’s Got Talent.

How long have you been doing standup and what got you into it?

So Oct. 20, 2013, was my first set that I ever did. I did an open mic at Side Splitters Comedy Club in Tampa. So that was my first time on stage, which that club has one of the best mics in the city … I wrote some jokes, went there in October, and it’s been a long road ever since.

When I was in school, I used to watch Dave Chappelle, I saw him do Killin’ Them Softly. And I just thought it was the greatest thing I’ve ever seen in my life. I was like, that’s a job? People get to do that? I was baffled, like “oh, man, I can’t believe he got paid money to talk into a microphone.”… And then I would be awake late at night watching just different comedy specials, like all the Comedy Central Presents in those days. I finally turned 18 and 19 and I was like, I’m gonna go try it. But when I was 14, I was telling jokes at the lunch table, trying to make my friends laugh.

What prompted you to audition for America’s Got Talent?

Some people had seen the DryBar thing and they’re like, this guy fits our demographic. And I was like, I would really like to be on that platform. AGT is such a big demographic and such a big thing that my mom and I used to watch it together all the time. And I’ve had a bunch of friends on there too, like Preacher (Lawson), Ryan Niemiller, they’re all my close friends so when I saw that they were on it, I was like, oh man, I want to do that. So luckily, I got an audition and did it.

How has the experience been?

It was amazing and stressful and words can’t even describe it. You imagine meeting these people, but under those types of circumstances to like, meet someone and have to impress them, honestly, it felt like when you meet your significant other’s parents for the first time, there’s so much pressure … you have to make them laugh. You have to make them like you in your first meeting of these people you’ve seen on TV for years. It’s nerve-racking.

You told me one of your main motivations is to make your mom proud and to help her out. Can you talk a little bit about that?

Yeah, my mom has done everything possible to let me live out my dream. I told her when I first started, “You give me 10 years, I’ll be able to provide you with the life you deserve.” And I’ve been able to do it within eight years, and I’m excited to finally start being able to give back. Because it’s not easy for any type of parents to put their life on hold. And really just make sacrifices so that you can chase your dream … She’s done everything she can to let me pursue this passion.

Sign up for the best things to do in Tampa Bay with our Top 5 newsletter
Our free newsletter will show you the greatest arts and entertainment options each week.
TYPE YOUR EMAIL ADDRESS HERE

During the audition, Heidi said you don’t sound like you’re from Tampa.

She threw me off! I’ve also heard that a lot in my life and you know, nobody from Florida really sounds like they’re from Florida. Tampa doesn’t specifically have an accent but we also are such a melting pot of people that we all do sound different.

What do you think about the local standup scene in Tampa?

I love it. I love how much room there is for growth, like me starting out here and getting to see just how many of the guys around here are just so good. And there’s so much stage time, this city is hungry for entertainment. So a lot of guys have a lot of chances to get better. The only way to get better at standup is stage time. And luckily, people here provide that.

I’m just excited that Tampa is really doing well, I just love this city so much. I just love, you know, the Stanley Cup, we got back-to-back championships. We’re looking good for another Super Bowl run. Tampa’s really doing great. Growing up, I know a lot of people were kind of hard on Tampa and hard on Florida in general, you know, jokes and stuff. But now it’s hard to make jokes when we’re winning.