Home » Side Splitters still bringing the laughs throughout pandemic

Side Splitters still bringing the laughs throughout pandemic 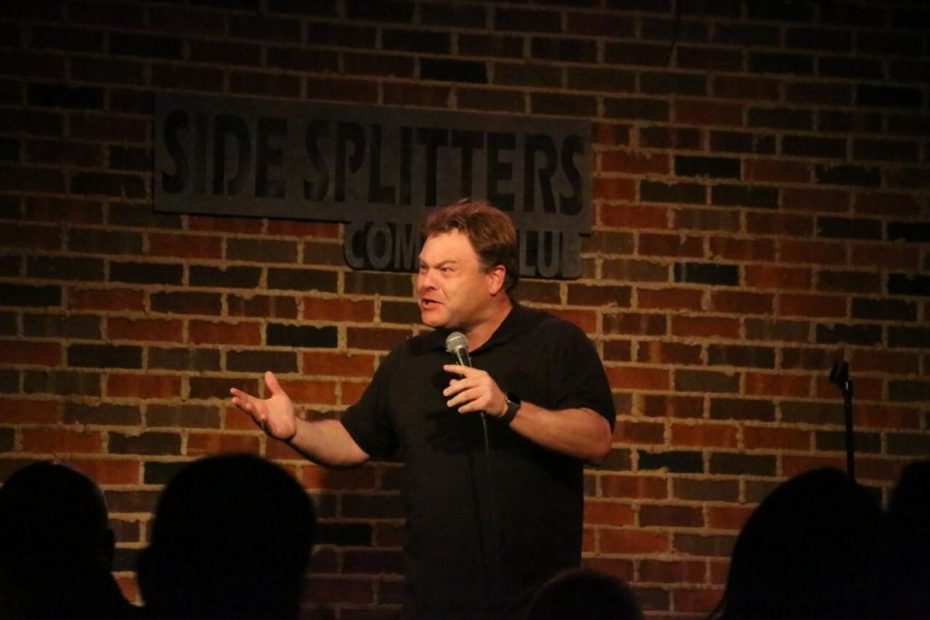 Finding the funny throughout a nearly two-year global pandemic has not been an easy task, but local residents needn’t travel far in search of people giving it a go.

Side Splitters Comedy Club, entrenched in the Carrollwood community since 1992, is plowing ahead, COVID be damned.

“It’s been up and down, but people need to laugh,” owner Brian Thompson said while sitting at the Side Splitters bar during off-hours last Wednesday.

Thompson, who’s been with the club since 2007 and bought it in 2019, said operations aren’t quite back to pre-COVID levels but things continue trending upward.

“When we first reopened, to be honest, it wasn’t fun for us,” he said. “We were masked up, we were gloved up, we were doing everything we could with paper menus and plastic drinkware, but the biggest issues were that people were so tight and it’s hard to get rolling laughter with limited seating.”

The days of every-other-table seating, mandatory masking, etc. have passed – hopefully – and Thompson said comics and crowds, alike, are eager to fill the club and have some fun.

“All things considered, we truly had a great year in ’21,” Thompson said. “Hopefully the momentum continues. It’s so much easier to go from good to great than it is from slow to good. For 2022, I hope we get the (COVID) numbers under control, the regulars keep coming and people rediscover Side Splitters and live comedy. I think, as a whole, live comedy isn’t thought of enough as an entertainment option.”

For those unfamiliar with live comedy and going to local clubs, a quick glance at Side Splitters’ upcoming schedule shows the diversity of what’s available. One day guests may see a couple of local up-and-comers cutting their teeth and the next it’s former “Saturday Night Live” cast member Jim Breuer (coming in February).

And then there are the extra special nights. They don’t come often and are unpredictable, but they’re the type of moments that can’t be experienced unless you’re in attendance.

These include a night in 2021 when a middle-aged, balding redhead in a ball cap and mask was standing in the back of the main room during a show.

“People walking by were asking him where the restroom was and he’d just hold the door,” Thompson said.

It was Louis C.K.

The comedy legend coming back from some … issues … was at Side Splitters with fellow comic Joe List and wanted to work on some material, but without it being announced in advance. Louis C.K. went on and did about 20 minutes, Thompson said, and suddenly a fun night out turned into one guest will be talking about for a long time.

A similar situation happened in 2021 with another massive headliner in Ron White.

“It was funny, I was on my way in and I got a text message from an agent,” Thompson recalled. “He said Ron White wants to middle at your club. I’m like, middle?”

The Blue Collar Comedy Tour star did a weekend at Side Splitter, pulling his big tour bus up unannounced each night to the delight of those lucky guests in attendance.

On the other end of the spectrum, there’s the opportunity to see someone up-close and personal right before their career takes off. Thompson said he’s witnessed that in recent years with Tim Dillon.

“In 2019, he was here in October and it was not really a busy week by any means,” Thompson said. “He was here the same week the following year, during COVID, during Games 1 and 2 when Tampa Bay was in the World Series, and sold out two shows, Monday-Tuesday.”

And though COVID continues to make life difficult for smaller, local stand-ups because of reduced stage time when regional and national acts come to town, Side Splitters is still offering weekly open mic nights, Thompson said.

“We try to use local guys as much as we can,” he said. “We do open mic more than ever now, at least every week.”

Barring a COVID digression or the general collapse of society, Thompson said he has high hopes for what lies ahead in 2022, including some big names already on the calendar (see Andrew Dice Clay, Mark Normand, Todd Barry, etc.) and Side Splitters’ 30th anniversary. The celebration of three decades in Carrollwood is not yet set, but Thompson said it’s in the works.

Side Splitters also expanded during COVID, with new locations opening last year in Wesley Chapel and St. Petersburg. The Wesley Chapel location is within the Grove Theater, Bistro, and Entertainment complex, and the St. Pete Side Splitters operates from space within Coastal Creative, 2201 First Ave.

To find a full list of upcoming shows at all three locations, go to www.SideSplittersComedy.com.